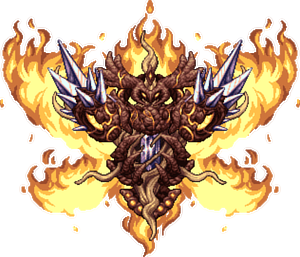 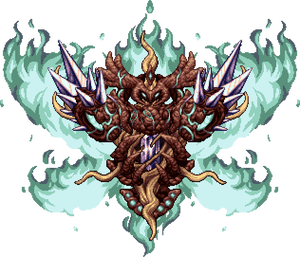 Providence, the Profaned Goddess is a post-Moon Lord boss fought in either The Hallow or The Underworld biomes.

Defeating Providence will provide the player with Divine Geodes, as well as the Rune of Kos used to summon the Sentinels of the Devourer. Additionally, Uelibloom Ore will generate in the world, and the Ravager and Brimstone Crag enemies will be buffed and start to drop Bloodstone.

Providence does not spawn on her own and requires the player to summon her with the Profaned Core while in The Hallow or The Underworld biome. Her battle will change significantly depending on whether she is summoned at Day or at Night.

When summoned, a brief animation plays where Providence appears in a multicolored aurora of light before attacking; the aurora will be yellow and pink if summoned in The Hallow, red and yellow if summoned in the Underworld, or blue and purple if summoned at night. Providence will also play a sound resembling a fiery explosion instead of the regular boss roar.

Providence herself deals no contact damage, instead utilizing her wide array of projectiles to deal damage. Providence's attacks and behavior vary depending on which phase and health she is currently in. She switches through these multiple phases pseudo-randomly, spending several seconds in one before choosing another.

If the player exits the Hallow or the Underworld while fighting Providence, she will become more aggressive until they return. If still alive at nighttime, she will also act as if Boss Rush is active along with gaining a greenish-white tint to her crystals, projectiles, and wings.

Retrieved from "https://calamitymod.wiki.gg/wiki/Providence,_the_Profaned_Goddess?oldid=172529"
Categories:
Hidden categories:
Cookies help us deliver our services. By using our services, you agree to our use of cookies.