From Calamity Mod Wiki
Jump to navigation Jump to search

Not to be confused with Astral Injection, or the debuff of the same name. 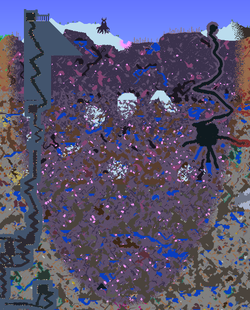 The parabolic shape of the Astral Infection biome, as viewed on the map in a large world.
The meteor can be seen in pink at the top-center of the biome, with the Astral Beacon pillar positioned to the right of it.

This twisted dreamscape, surrounded by unnatural pillars under a dark and hazy sky.

The Astral Infection is a Hardmode biome added by the Calamity Mod. It crash-lands into the Dungeon side of the world via a meteor upon defeating the Wall of Flesh, which infects the nearby terrain and extends somewhat deep underground. The biome is filled with a sickly purple haze, and is populated by many alien creatures as well as dark monoliths of various sizes. It also contains a large Astral Monolith pillar, which houses an Astral Beacon on top of it. Players are alerted of the Astral Infection's arrival via a status message: "A star has fallen from the heavens!"

The meteor itself is made out of Astral Ore, which can only be mined after defeating the Astrum Deus boss. Tiles in a large area around and below the impact site are converted into Astral versions of themselves, including Astral Dirt, Astral Stone, Astral Sand, and Astral Ice, among others. Trees are converted into Astral Monoliths as well. However, the infection does not actively spread; only the initial impact converts tiles.

Two bosses, Astrum Aureus and Astrum Deus, can be summoned in this biome.

An Astral Infection meteor has a 100% chance of spawning after defeating the Wall of Flesh for the first time. After the first meteor has landed, defeating Astrum Aureus will always spawn a meteor in the world, assuming the limits have not been met yet.

No new meteors will fall if there are already a certain number of Astral Ore blocks above 0 depth. The limits are:

Alternatively, meteors will fall but not infect any nearby terrain if there are already a certain number of Astral-infected tiles in the world. Astral Ore blocks are not counted toward this total. The limits are:

16% of the world centered on the player's spawn point is protected from falling meteors. Meteors will not land within 25 tiles of a player, NPC, or a chest, nor directly on top of a platform.

Building a completed Skybridge across the entire world is not recommended pre-hardmode, as this will cause the Beacon to spawn on top of the skybridge, possibly out of reach. The biome will still spawn normally however.

Retrieved from "https://calamitymod.wiki.gg/wiki/Astral_Infection?oldid=170536"
Category:
Hidden category:
Cookies help us deliver our services. By using our services, you agree to our use of cookies.