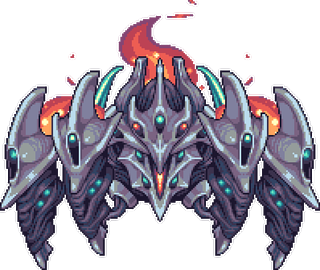 "A titanic cyborg infected by a star-borne disease..."

Not to be confused with Astrum Deus, a similarly-themed worm-like boss.

Astrum Aureus is a Hardmode boss. Defeating it causes an Astral Infection meteor to fall somewhere in the world.

Astrum Aureus does not spawn on its own and must be summoned at Night using the Astral Chunk in the Astral Infection biome.

If Astrum Aureus is alive when it becomes daytime, it will enrage, drastically increasing the speed it moves and jumps and completely removing its recharging phase.

For more elaborate strategies on defeating Astrum Aureus, including weapon and arena recommendations, as well as a more in-depth breakdown of the fight, see Guide:Astrum Aureus strategies.