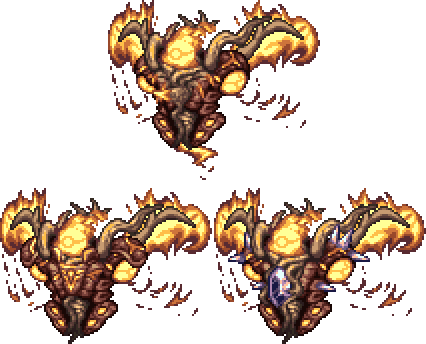 "The ever-rejuvenating guardians of the profaned flame."

The Profaned Guardians are a group of post-Moon Lord bosses fought in The Underworld or The Hallow. They need to be killed in order to obtain the Profaned Core, used to summon Providence, the Profaned Goddess, and each Guardian also drops a special respective "Relic" item.

The Guardians are also summoned during the fight against Providence, where they will not attack but instead provide buffs to the boss while active.

All three Profaned Guardians spawn at the same time. The Guardian Commander is the main boss, but cannot be reasonably harmed until the Guardian Healer and then Defender are defeated. As the Guardians are defeated one by one, the remaining ones will become more aggressive.

If the player exits the Hallow or Underworld for more than 5 seconds during the fight, the guardians will become more aggressive and fire more projectiles more often until they return.