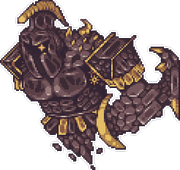 The Earth Elemental is a rare Hardmode mini boss found in the Underground and Cavern layers. Its method of attack is to fly toward the player and charge every 10 / 5

seconds, while firing blasts of small rocks, which burst upon impact with blocks. Occasionally, a larger rock is fired which bounces off blocks twice before exploding.

Due to its intimidating size, ability to phase through blocks, and immunity to all forms of knockback, it can be a dangerous encounter for unaware players.

Retrieved from "https://calamitymod.wiki.gg/wiki/Earth_Elemental?oldid=171920"
Categories:
Hidden categories:
Cookies help us deliver our services. By using our services, you agree to our use of cookies.