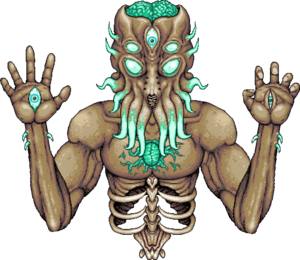 If you were looking for Moon Lord on the vanilla wiki, click here.

Moon Lord is a Hardmode boss. Defeating the Moon Lord is required to unlock the final broad group of bosses and content in the Calamity mod.

While in Revengeance Mode and Death Mode, Moon Lord gains several changes to its AI and stats, making it substantially more difficult to fight.

Moon Lord can be spawned by fulfilling either of these conditions:

In all modes, True Eyes of Cthulhu no longer deal contact damage.

Moon Lord spawns a minute after being summoned and immediately begins attacking, cycling through its roster of attacks. It teleports more frequently based on its distance from the player, attempting to stay close at all times.

The Phantasmal Deathray attack sweeps noticeably faster, making it more difficult to avoid. Following the Deathray, the Moon Leech Clots spawned by the Tentacle heal the Moon Lord for 1,250 health each instead of 1,000. Phantasmal Sphere attacks are more spread out and move slowly initially, accelerating over time. Phantasmal Eyes home in for a while longer than normal.

Defeating each of the Moon Lord's eyes does not disable them, and will instead spawn several True Eyes of Cthulhu. The Moon Lord's eyes continue attacking afterward, but at a reduced frequency and with lower velocity projectiles. True Eyes of Cthulhu do not use their deathray attack in Revengeance Mode, and will instead stick together and attack in sync.

After defeating all three of Moon Lord's eyes, its core is exposed. When this happens, players will take 10% more damage from all sources until the Moon Lord is defeated or leaves.

In the second phase, the Phantasmal Deathray will now penetrate blocks, forcing the player to dodge the attack in order to avoid it.

For a Normal and Expert mode guide to Moon Lord, see Moon Lord strategies on the vanilla wiki.

Retrieved from "https://calamitymod.wiki.gg/wiki/Moon_Lord?oldid=174578"
Categories:
Hidden categories:
Cookies help us deliver our services. By using our services, you agree to our use of cookies.