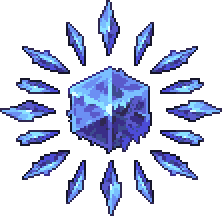 Cryogen is a Hardmode boss that can be fought in the Snow or Ice biomes which possesses many phases and features a multitude of projectiles and enemies.

Defeating Cryogen will free the Archmage, as well as generate Cryonic Ore in the Ice biome.

Cryogen does not spawn on its own and requires the player to summon it with a Cryo Key while in the Snow biome or Ice biome at any time.

Cryogen has six phases, each of which has its own attack pattern and AI. It will progress through these phases as it loses health.

Cryogen also spawns with an ice shield which protects it and inflicts contact damage; this shield must be destroyed to directly attack Cryogen and will regenerate 18 / 12

seconds after being destroyed.

Leaving the Snow biome will cause Cryogen to enrage, almost doubling its speed and acceleration. 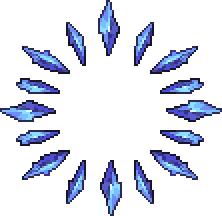 Retrieved from "https://calamitymod.wiki.gg/wiki/Cryogen?oldid=171855"
Categories:
Hidden categories:
Cookies help us deliver our services. By using our services, you agree to our use of cookies.