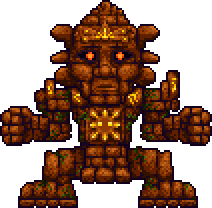 Map Icon
If you were looking for Golem on the vanilla wiki, click here.

Golem is a Hardmode boss fought in the Jungle Temple. It can only be fought after Plantera has been defeated in the current world.

While in Revengeance and Death Mode, Golem has a buffed AI that is much stronger and more complex than the fight in Normal and Expert modes.

In all modes, if Golem is fought outside of the Jungle Temple, it will enrage, increasing the speed of its attack pattern and defense. The free golem head will not inflict contact damage. Additionally, all body parts inflict Armor Crunch.

Golem has three phases in Revengeance and Death Mode. Note that this page will not cover the Golem fight in Normal and Expert Mode.

Golem spawns above the player's head, falling down to the ground. It will begin to cycle through its attacks. Golem will fire high-velocity bouncing fireballs every three seconds and jump towards the player. Each time Golem jumps it will slam into the ground, creating a line of dust particles. Golem will also throw its fist towards the player at the same rate. Only the left and right fists can be damaged during this phase and must be destroyed to progress the fight.

After destroying the fists. Golem will begin to fire two yellow lasers at the same rate as the fireballs. Only Golem's head can be damaged during this phase and must be destroyed to progress the fight.

Golem's head will regen its health to full, detach, and begin flying above the player. Once the Golem body reaches 90% health, the Golem Head will begin to fly in a rectangle pattern. The head will fire two sets of lasers twice and one lingering fireball before moving. The lingering fireball will create an explosion that will linger for four seconds. Golem's body will also begin to fire two lasers. Golem will also launch three bouncing fireballs each time it slams the ground. When the Golem body reaches 10% health, it will fire two additional lasers. Both the head and the body can be damaged in this phase. Only Golem's body needs to be destroyed to end the fight.

In the Boss Rush

For a Normal and Expert mode guide to Golem, see Golem strategies on the vanilla wiki.